Article in Pensions | 19 Sep 2016
Print Share
2016 Claim Statistics Life insurance payments of over €105 million... Bank of Ireland Life has released its 2016 claim statistics, revealing the Bank paid out life insurance payments of over 105,385,473 euro. These included life cover payments of over 66million euro, specified illness claims of 26.39million euro and income protection claims of almost 10.2million euro. The average claim by individuals for life cover was 52,400 euro in 2016 with 63% of claims related to men. Accidents replaced stroke and moved into the top three conditions for life cover for the first time, having more than doubled from just 2% in 2015 to 5% in 2016. Joining accidents in the top three conditions for life cover claims by individuals were cancer (57%), which increased by 13% in 2015, and heart (14%). The average claim by individuals for specified illness in 2016 was 69,898 euro, with 54% of claims related to men. Cancer related illness claims increased by 3% and heart related claims decreased by 3% from 2015 figures. Almost one third (30%) of income protection claims are related to mental illness, with the same proportion (30%) related to musculoskeletal issues and one in five (19%) related to cancer. Over third thirds (75%) of claims for income protection were paid to women last year. 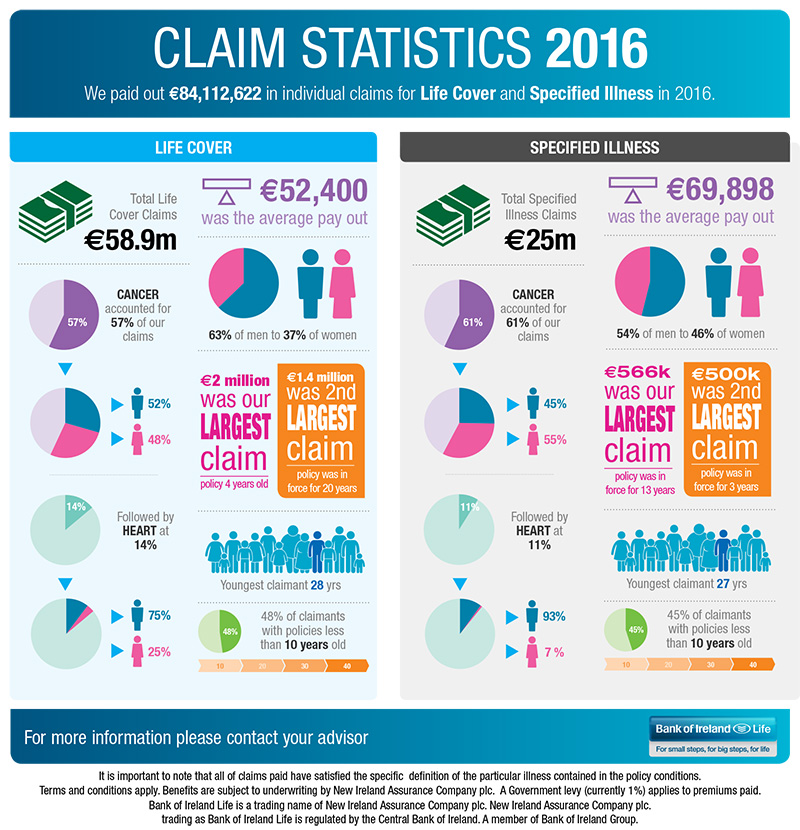 Take the next step

Our advisors will assist you with all the expertise you need to plan for the future that’s right for you.

Go to our support centre to see a full list of frequently asked questions.