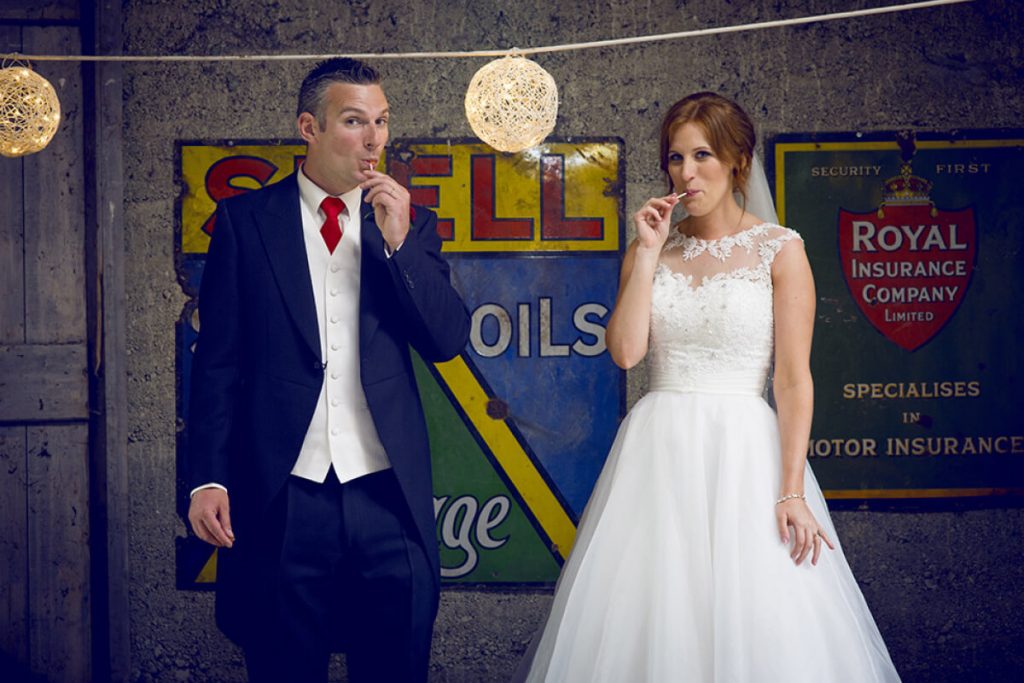 Sara used to work in hotels. For ten years, she was involved in organising hundreds of wedding receptions. She even became a wedding blogger. But when it came to her own wedding she didn’t want just the usual hotel reception for herself and husband-to-be Eoin, she wanted something different.

“Behind Eoin’s granny’s house in Banagher, Co. Offaly, in a yard almost completely overgrown with weeds…”

…lay a disused dancehall. Decades before, showbands had packed the place out and many a local romance had begun right there to the favourite songs of the time. Even though it was now near derelict there was still something really special about the place. Could this be the wedding venue she’d been looking for? Sara talks us through the photos that follow.

“Eoin’s Granny Ev was the matriarch of the Kennedy household”

She lived in Banagher, Co. Offaly all her life and had four children – Eoin’s Dad being one of them. Everybody would know Ev. Her father, Tom Quigley, had the main tailor’s shop there on the high street in Banagher. Over time, larger shops like Supervalu and other stores came in but, while things outside changed, the house and shop remained just as they were. When you walked in the shop façade was still there: the old counter, the old register. When you opened the door into the kitchen it was exactly as it would have been in the 1960s. And that was Granny Ev all over. She was someone who knew what she liked and she stuck with it.”

“Ev’s father, Tom, designed and built a dance hall on the grounds at the back”

He built it originally for the local community and called it Quigley’s Hall. At the time of the wedding it was being used by the local boxing club hence the punch bags on the walls! In the 1960s it became very popular as a venue where showbands played. So many people came up to me and Eoin in Banagher and said ‘oh, I met my husband in that dance hall’. It was the ballroom of romance! Ev herself got married in the dance hall sixty years before us in 1954. We only found that out when we asked her if we could get married there and she said ‘Ah yes, I got married there’. What a great thing to be able to do that in your back garden and for us to have that link with the family history was amazing.” 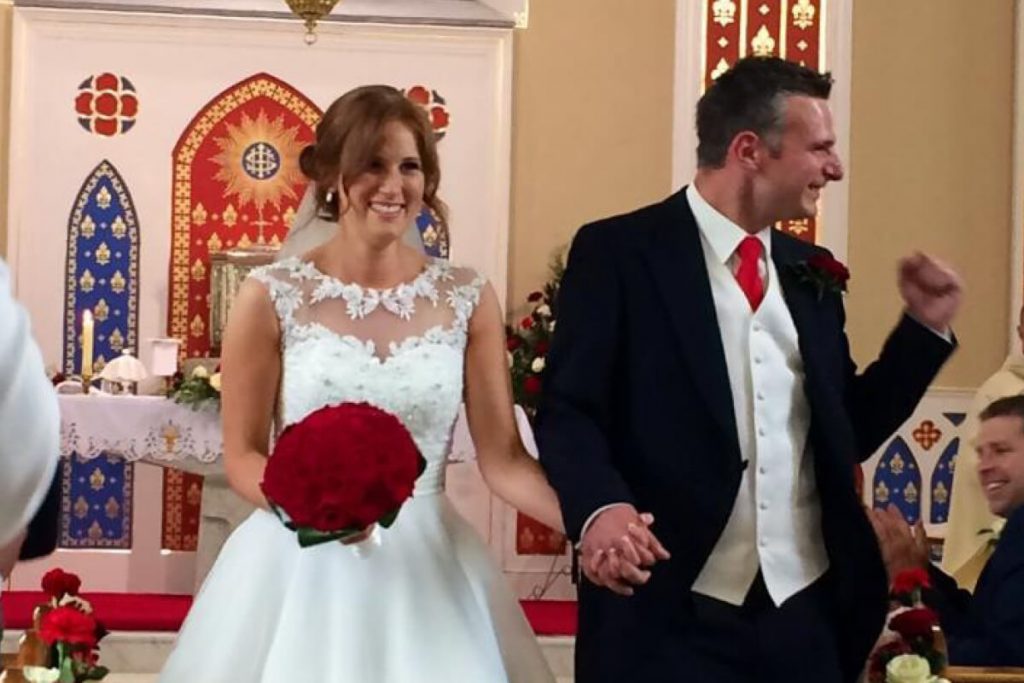 Her husband, James Kennedy, had passed away about twenty years before. The garden had previously been Ev’s pride and joy but as time went on it became more and more difficult for her to maintain. When you walked out from the house into the yard you had moss pretty much up to your knees and grass up to your hips. But there was still something really special about it. There were a few outhouses where they would have kept turf, there was a henhouse, there was all this stuff that hadn’t been touched in years. We tidied them all up by removing old timbers, plastic, and cardboard boxes which filled three skips. The whole family pitched in so it wasn’t just me and Eoin.”

“The design of the wedding started with just one thing – a red bouquet!”

That was it! Then there was the ‘vintage circus’ theme. I saw an old poster one day with the red and white of an old circus tent on it and it just stood out. I could visualise the look I wanted but I couldn’t find it anywhere so I had to create it myself. I hadn’t sewn before. I couldn’t even put a button back on a shirt. So I got my mum to teach me to sew over a weekend and I created curtains, table runners, napkins and a whole load of pieces. I took jam jars from the 1960s that I’d found in Ev’s garden cleaned them out then got some lace and ribbons from Etsy and created little tea light holders that we put outside when it got dark to light the yard.”

I had all the work that needed doing on one clipboard. Luckily my chief bridesman, Tony, runs a hotel in Chelsea and the day before the wedding I was able to hand him my clipboard and have him take over. In this picture here I was walking them through the house because we had to transform the outhouses into a tailor’s, Ev’s living room and a little turf shed.

Sharon and Yvonne were very brave because they went up into the attic and they near died because the first thing they saw was an old vintage mannequin and these things are creepy as hell and all we could hear was screaming from the roof! But they did find old vintage birdcages, trilby hats and suitcases. Eoin’s aunt Angela spent our wedding day bringing people on tours of the house. We could have sold tickets!” 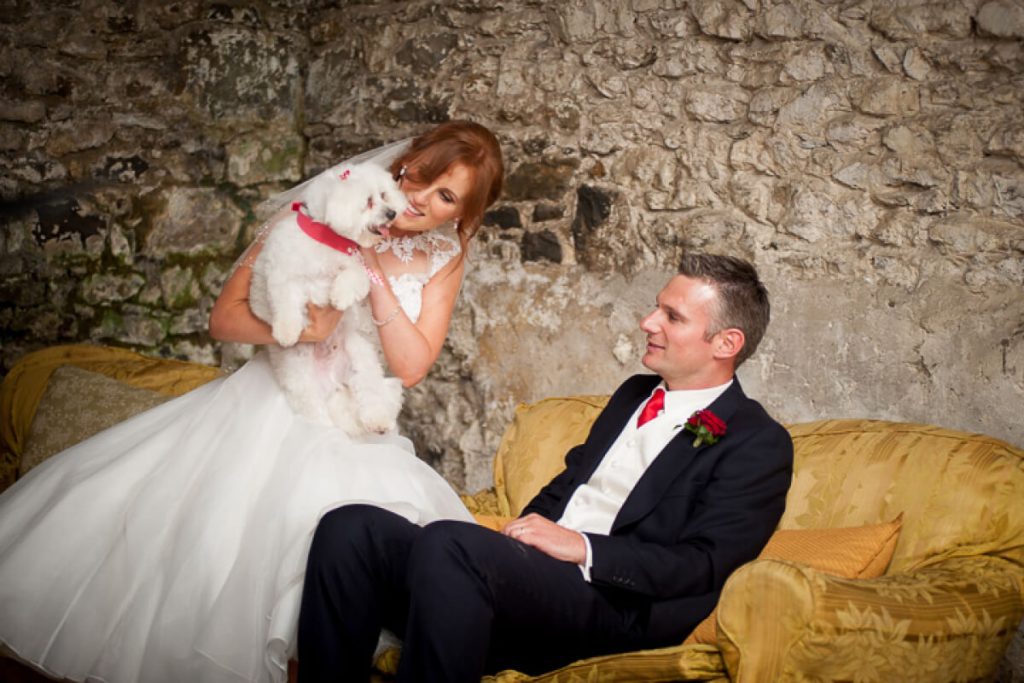 …and I had in my head that that was the style I wanted. But you couldn’t get these dresses in 2014 for love nor money. I had gone to Vegas with that group of friends for our 30th birthdays and I bought a Vera Wang wedding dress over there, brought it home and a couple of weeks later realised it wasn’t the one. Then I was at a wedding fair with Sharon, one of my bridesmaids, and she saw a t-length dress by Tom Flowers and she said you have to try it on. I did and loved it. I bought it there and then. So that was that. That dress was absolutely the right look for that occasion.”

“The church is St Rynagh’s in Banagher”

It’s within walking distance of Granny Ev’s house on the other end of the high street. Easy enough if you’re not wearing high heels! We got a lift down to the church but in hindsight I would have loved to have walked through the town to the church because every business had little signs in the windows saying ‘good luck, Sara and Eoin’ and they were all out with sandwiches and drinks for everyone walking by so the guests had great craic going in and out of the pubs. A lot of the local people who’d heard about the wedding came out to have a look but didn’t get to see us so looking back I wished we’d done that.”

“That’s our first baby right there, Tim who’s a Maltese”

Eoin wasn’t going to let me get a dog when we were going out and he challenged me and said ‘you can get a dog if on holidays you do three adventure sports – a skydive, whitewater rafting (Sara can’t swim by the way) and canyoning down the Alps (something that involves a lot of abseiling and zip lining). I did all three challenges. Two days after we’re back Eoin rings me and says ‘where are you?’ and I said ‘I’m on my way to Cork to get a dog.’ The skydiving instructor I had was blond and really good-looking and everyone was winding Eoin up about him so I decided to call the dog after him. Tim, the dog, came to the wedding after the church and before the meal. Tim – blond, good-looking, skydiving instructor Tim – did not attend the wedding.”

We had a 90s themed band and all the parents, aunties and uncles said ‘but nobody’s going to know any of the songs!’ Well, I’ve never in my life seen a dance floor more hopping. I saw Eoin’s uncles bopping to the Spice Girls and giving it socks. Our first dance was also a 90s song – the 1991 house hit ‘Finally’ by CeCe Penniston.” 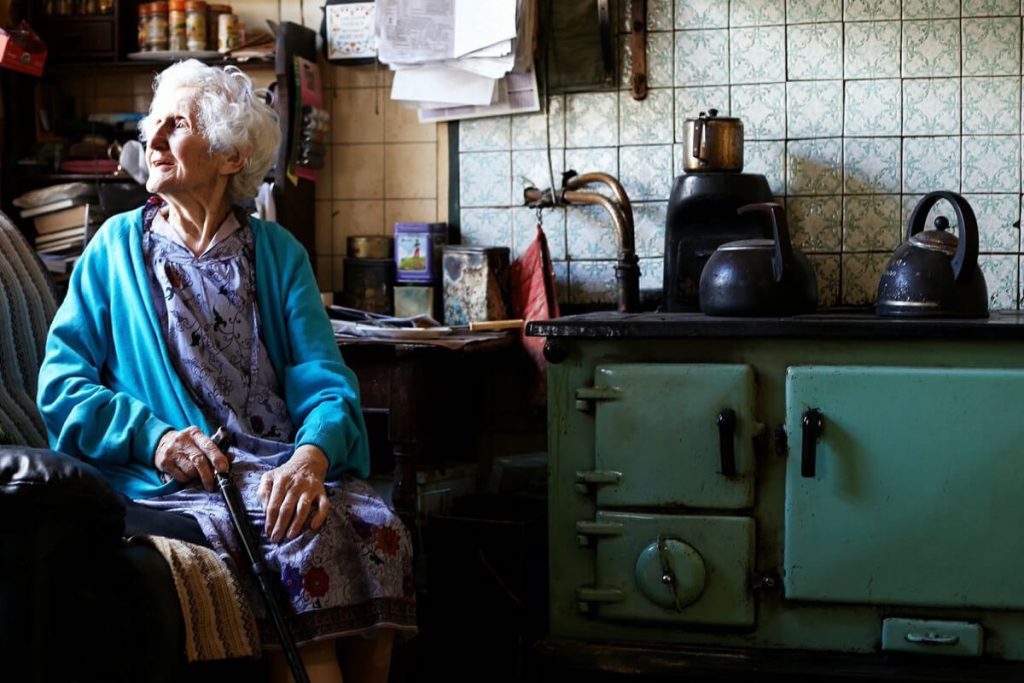 However, last year Eoin’s cousin got married in the dancehall and there’s probably been ten enquiries to use it for weddings by now. It’s still used all year round by the boxing club but, over sixty years since Granny Ev got married there, the romance of the dance hall still lingers on.”

Thinking of saving up for your big day?

A Bank of Ireland Goalsaver account can help you to stay on budget plus there’s a chance to win cash towards your wedding costs in our Goalsaver competition. Find out more here.